Novoair Airlines was initially established in 2007. This airline operated its first flight on 9 January 2013. Novoair is a homely airline agency operating mostly domestic flights. It operates 28 flights each day from Dhaka to its eight destinations in Bangladesh. Novoair has only one international destination; it is Kolkata, India. Keep reading to know more. 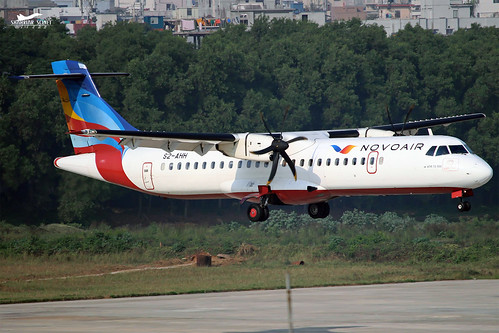 Novoair was founded in October 2007. This airline was founded as an aviation service provider as the business diversification of parent company Tusuka Group with directors Arshad Jamal, Faiz Khan, Mofizur Rahman, and Fayzur Rahman Badal.  In late 2011, the process of founding a scheduled airline of Novoair began. On 9 January 2013, this airline operated its first commercial operation with Embraer 145 jet aircraft.

In later, the Embraer fleet was replaced with ATR 72-500 turboprop aircraft. Now, this airline providing all domestic flights in Bangladesh, with only one international destination in Kolkata. This airline launched its first international flights on 1 December 2015. In 2014 Novoair has received the best domestic airline award.

On 9 January 2020, as of the Novoair seventh anniversary, this airline had operated 61,599 flights to domestic destinations and its only international destination, Kolkata, carrying more than 3.33 million passengers.

Domestic Destinations:
Mainly Novoair is a homely airline that is mostly operating domestic flights. This airline has connected many important cities in Bangladesh to the capital of Dhaka. See the following chart to know more about the Novoair domestic destinations.

Novoair is the first and only Bangladeshi airline that is using Embraer ERJ 14 so far. In later, they focused on an all-ATR fleet. Novoair airlines have added their seventh aircraft on 15 December 2019.

If you want to know about the Novoair Airline ticket price of different flights, you have to read another article. The information is given in that article clearly.

I hope all the information in this article was helpful for you. The information was collected from a valid source. If you have something to say, leave a comment in the below comment box.